>This weekend we celebrated with my friend Tracy on the impending arrival of her second baby girl! The baby shower is a whole separate post for later, but for now let’s talk about diying some pretty rad wall art. I combined two popular ideas floating around the crafting blog world right now of graphic prints and silhouettes, layering them into some graphic awesomeness with a personal touch. 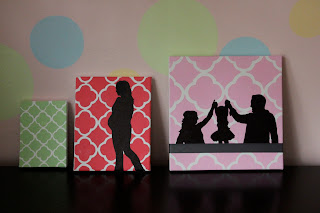 The coral one is of Tracy round with this pregnancy. The pink one is of their family now. And the green one is with the promise of having baby girl’s initials or profile on it once she makes her debut.

This project was shockingly simple, it just takes a little time. Here’s how I did it. I’m sure there are other ways to go about it, but this made sense to me. Sorry for the lack of step-by-step pictures, the camera battery was dead the night I made these.

Materials Needed:
Canvas
Paint
Paintbrush
Stencil – I used this quatrefoil stencil. But you could do any assortment of graphic design/stencil in the background!
Picture of Subject
Scanner/Printer
Black Sharpie
Ribbon (Optional)

Step 1: Print and cut out stencil. (For multiple paintings, I scanned the stencil and reduced and enlarged the size before printing to end up with different sizes of stencils.)

Step 2: Use stencil to trace quatrefoil design onto canvas with a light pencil. (I actually even used a gummy eraser and erased the pencil immediately after I traced it for the pink and green paintings. The lines were still visible to the eye, but weren’t as visible through the paint that way. This must be a technique I have reserved from middle school when I would secretly put make-up on in the mornings before school and then wash it off. The essence was vaguely left, but wasn’t technically there so I couldn’t get in trouble…sorry for being sneaky mom! )

Step 4: Reduce or enlarge photo on computer as needed to fit canvas proportion. We don’t have a fancy photo shop program so I just pasted the pictures in Word and fiddled with size.

Step 5: Print picture and cut out around figures. (No need to print for detail. Just a fast draft, gray tones will do since you’re just using it to get an outline.)

Step 6: Use picture cut-out as stencil and trace with pencil on painted quatrefoil canvas.

Step 7: Color inside traced figures with a “wet” black Sharpie. (By “wet” I mean one with lots of ink.)

Step 8: (Optional Ribbon) If you notice the pink canvas has a gray ribbon under the silhouette of Tracy’s family. That’s because the picture I had to use cut them off at their trunks and putting them flush at the bottom of the canvas was not in a happy rule of third’s place for the eye. So, instead of just having them floating in space, I threw a little bit of ribbon under them to anchor them into the canvas by dabbing a little hot glue on the back of the canvas.

Now you have yourself a memory to treasure with style! Easy project, low-skill, medium time, big pay-off. The litmus test of crafting projects is if I actually want to keep it once I’m finished instead of chucking the product and re-chiming how creating is mostly “about the process”. Yes, but it’s nice to make something awesome every once in a while too! I think I’m going to make some of my family and kiddos for our home!